Another Good Article by Dan Kahan

The source of the public conflict over climate change is not too little rationality but in a sense too much. Ordinary members of the public are too good at extracting from information the significance it has in their everyday lives. What an ordinary person does—as consumer, voter, or participant in public discussions—is too inconsequential to affect either the climate or climate-change policymaking. Accordingly, if her actions in one of those capacities reflects a misunderstanding of the basic facts on global warming, neither she nor anyone she cares about will face any greater risk. But because positions on climate change have become such a readily identifiable indicator of ones’ cultural commitments, adopting a stance toward climate change that deviates from the one that prevails among her closest associates could have devastating consequences, psychic and material. Thus, it is perfectly rational—perfectly in line with using information appropriately to achieve an important personal end—for that individual to attend to information on in a manner that more reliably connects her beliefs about climate change to the ones that predominate among her peers than to the best available scientific evidence.

His empirical claim is that disbelief in global warming, or in evolution, is not evidence of scientific ignorance. If you separate groups on roughly a left/right basis, belief in warming increases with increasing scientific intelligence (measured in other ways) in the group predisposed to believe in it (left), decreases with increasing scientific intelligence in the group predisposed not to believe in it (right). Similarly with evolution if you divide the groups into more or less religious. His explanation ...:

If that person happens to enjoy greater proficiency in the skills and dispositions necessary to make sense of such evidence, then she can simply use those capacities to do an even better job at forming identity-protective beliefs.

The article is too long and starts with an irrelevant analogy to observer effects in quantum mechanics, but it has lots of interesting stuff in it. Among other things, if you test people to see how much they understand about the theory of evolution, those who believe in it do no better than those who don't. Similarly for global warming.

I came across a recent piece discussing evidence about beliefs on climate issues. It finds  that Democrats mostly believe temperatures are warming due to human action and something must be done about it, Republicans mostly don't, but that the difference is not due to differing perceptions about what climate scientists believe. If the question is not what is true but what most climate scientists believe, Republicans and Democrats give roughly similar answers—correct in some cases, incorrect in others.

The author's conclusion is that the debate has become a status conflict, with each side taking the position that it is wise and good, the other side the opposite. One implication he draws is that the campaign to persuade people that 97% of climate scientists agree is based on the mistaken assumption that the reason people are not persuaded is that they don't know what climate scientists believe.

It struck me that his description fits my observations of the online debate. Most participants appear confident that their side is right, the other side stupid or evil. Most of the posts and comments are attempts by one side to put down the other. Substantive arguments occasionally appear, but they are largely cut and paste from popular web sites on the side of whoever is posting them.

I should add that I do not think it is clear what climate scientists believe. As best I can tell by my involvement in the argument, most such scientists think global temperature has been trending up and humans are at least partly responsible, many, perhaps a majority, think humans are mainly responsible. I have seen no evidence of what percentage take the next two steps, the conclusion that if nothing is done the results will be terrible and the further conclusion that there is something that can be done that is worth doing. But those steps are essential for the policy argument that one side of the dispute is pushing and the other side opposing.

As of 5:50 EST 6/23/14 the piece described in this post appears to have vanished. I have not yet figured out why or where, if anywhere, I can find it again.

After an exchange of emails with the author, who turned out to be someone I knew from my time at U of C Law school, the link is now fixed.
at June 23, 2014 18 comments:

The Purpose of Commencement Addresses

I don't usually make posts that are links to webcomics, but this one is both good economics and good commentary.

I deduce from further research that the strip in question is aimed at readers with a background in physics and economics and side interests in philosophy and probability theory. Funny that.
at June 20, 2014 30 comments:

Is the Ocean Still Warming?

The latest data seem to show a very considerable slowdown in ocean warming, starting a few years after the slowdown in atmospheric warming.

That raises an obvious puzzle. As I understand the situation—readers are welcome to correct me if I am wrong—there are satellite measurements of incoming and outgoing radiant energy, and they show a substantial net inflow. If atmosphere, surface, and ocean are all warming much more slowly than they were twenty years ago, where is that energy going?

The two obvious alternatives are that we are missing something, that warming is happening somewhere we cannot readily measure it such as the deep ocean, or that there is something wrong with the measurements that show a net inflow. I do not know enough to offer an educated guess as to which is the case and no other alternatives occur to me. 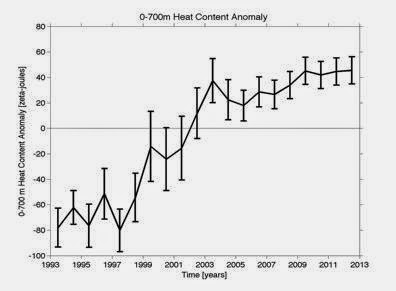 Surface and atmospheric temperature appears to have been roughly constant for about the past twelve years, perhaps a little longer, a pattern not predicted by the IPCC models. One response has been that the "missing heat" is going into the ocean. This raises a number of questions, but I want to start with one that only occurred to me recently. Data on the surface and atmosphere is routinely reported in the form of average temperature. Data on the ocean is routinely reported in the form of total heat content. Why?