The nice thing about the shower in the hotel room where I recently spent a few days was that the enclosure was quite long, long enough so that towels hung up at one end of it were a safe distance from the shower head at the other end. Also, and more important, long enough so that I could use the shower control at one end of the enclosure while a safe distance from the water at the other end whose temperature I was adjusting. That eliminated the usual problem of getting frozen or scorched while getting the water to my preferred temperature.

The not nice thing about the shower was that it took a long time for the temperature of the water to respond to a change in the control, which made the whole process of adjusting the shower to my preferred temperature more difficult than usual.

It eventually occurred to me that these two features were connected. The farther the control is from the shower head, the longer the pipe between them. The longer the pipe, the longer it takes for the changed mix of hot and cold water to get from the control to the shower head, hence the slower the process of adjustment. The feature I did not like was part of the cost of the feature I did like.

This is one example of a general point. Consider any system—a shower, a car, the human body—that has been optimized. If changing the system in some way, in my example moving the control farther from the shower head, produces a benefit, it must also produce a cost—otherwise the change would already have been made in the process of optimizing the system.

The human body has been optimized by evolution. But the purpose it was optimized for, reproductive success, is not my purpose. Hence there might be changes to be made that are to me unambiguous improvements—dollar bills lying on the pavement to be picked up. Still, it is prudent to suspect any obvious improvement of a downside.

Many years ago my father decided to stop using the phrase "there is no such thing as a free lunch" on the grounds that it was not literally true—consider consumer surplus and producer surplus. If someone pays me a thousand dollars to give a talk I would be happy to give for free, I have just gotten a thousand dollar free lunch.

I recently attended an event at which Bill Weld, who was the vice presidential candidate of the Libertarian Party in 2018, spoke. I learned two things:

1. He is not a libertarian
His solution to the problems of technological unemployment was some sort of government retraining program.

His view on immigration was that we should have a guest worker program and issue more work visas. There was no suggestion that we should be more willing to accept immigrants.

2. He does not understand economics
His argument for free trade was that it would benefit the U.S. because the U.S. has a very productive economy—he wasn't very specific, but it sounded as though he meant that we had advanced technology, productive workers and the like. That is a reasonable position in terms of 18th century trade theory, according to which strong economies benefit from trade at the cost of weak economies—in the old version, by a trade surplus which results in the strong economy accumulating gold and so becoming richer. It makes no sense in terms of modern trade theory.

I can well believe that Weld has, for a Republican politician, relatively libertarian views of social issues. But, on the evidence of his talk, he ought not to be a LP candidate for any office. That is a matter of some concern since it sounds as though he hopes to get the presidential nomination in 2020.

The event I heard him speak at was Libertycon last weekend. I expect the talks given there, including his and mine, will at some point soon be webbed, so you can listen to his and see if you agree with me.

I have not yet seen a video of Governor Weld's talk but someone has put up a video of mine.
at January 21, 2019 20 comments:

My New Book is Now Out

Legal Systems Very Different from Ours, mostly by me but with one chapter each by Peter Leeson and David Skarbek, is now available on Amazon, both as a paperback and as a kindle.

One of the nice things about current publishing technology is that revision is pretty much costless. So if any of you get a copy and spot something wrong, a typo, an index reference that is wrong, a mistaken fact, let me know and if I agree I can fix it. 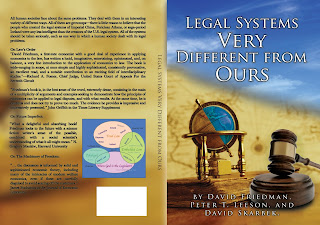 Facts Rarely Speak for Themselves


is the headline of a story describing some interesting research in economic history. I have not read the article it is based on but, assuming the report is correct, its conclusion is that there is a close correlation between the last names of the wealthiest Florentine families in 1427 and the last names of those currently wealthy.

There are at least two quite different interpretations of the reported facts. One is that families are surprisingly good at passing wealth and status down from one generation to another. The other is that the characteristics that produce wealth and status are to a large extent heritable.

One problem for the second is that last names are passed down in the male line, while talents are passed down through both sons and daughters—a fact observed by Galton more than a century ago. A family could choose to exclude daughters from inheritance of wealth but not of talent. But that is a less serious problem than it at first appears, because high status women mostly married high status men. The daughter of a wealthy Florentine family would usually combine her genetic heritage with the last name of a husband from a different wealthy Florentine family. Hence both genetic advantages and wealth would for the most part remain, from generation to generation, associated with the same pool of last names.

The story illustrates a general point: Facts rarely speak for themselves. How you interpret new facts depends on the picture of the world you fit them into.
at January 11, 2019 5 comments:

My new book, Legal Systems very Different from Ours (with one chapter by Peter Leeson and one by David Skarbek), appears to be available on Amazon now as a paperback (meaning that I haven’t actually gotten a copy), and I’m in the process of using Calibre to turn it into a Kindle. One tricky bit is the index.

Which raises a question–should a Kindle have an index? I can, with some work, produce an index where each entry is linked to the corresponding point in the text. On the other hand, since it’s an ebook someone looking for a word can always search for it, so perhaps an index is superfluous.

Inflating the Cost of Carbon