In a recent FaceBook exchange, the question came up of why I object to the omission from most talk about AGW of the benefits from milder winters. I ended up sketching an approach to the question of whether increased mortality from hotter summers was more or less than decreased mortality from milder winters. It was a longer piece than I usually bother with on FaceBook, which suggested that it would be more appropriate here, so here, with some editing, it is.


I begin with a Lancet article that found that, globally, "cold-related deaths outnumbered heat-related deaths by a factor of nearly 20, overall." To figure out how summed deaths from heat and cold were changed by AGW so far, or estimate how they will be changed in the future, I need two more pieces of information.
1. As temperature rises, what is the relative rise in temperature of winters relative to the rise in temperature of summers. I don't have data on that and it surely varies from place to place, but the physics of greenhouse gas warming implies that it will tend to be larger in cold times than in hot, so I would expect that, on average, winters will get milder by more than summers get hotter. I picked up that point from something Freeman Dyson mentioned in The Scientist as Rebel, and so far as I can tell it is correct.
2. What is the marginal effect on mortality of changes in both highs and lows? What is the percentage increase in mortality due to heat if highs go up by one degree? What is the percentage decrease in mortality due to cold if lows go up by one degree? How do they compare?
So far as I know, data on that do not exist. So I start with the simplest assumption—that the marginal effects are the same. If so, raising both the high and the low by one degree will decrease mortality due to cold by almost twenty times as much as it increases mortality due to heat, as per the Lancet numbers. Since, as per my point 1 above, AGW will on average increase lows by more than it increases highs, a given increase in global temperature due to AGW should decrease mortality due to cold by more than twenty times the amount it increases mortality due to heat.
If the question is whether the net effect is an increase or decrease in total mortality, the argument implies that for the net to be an increase in mortality the marginal effect of higher highs has to be more than twenty times as great as of higher lows. I suppose that's possible but I can not see any reason to expect it. Perhaps someone reading this can point me at data on the marginal effect that would let me replace my guess with something better.

CO2 is a greenhouse gas. So is water vapor. The more of one greenhouse gas in the atmosphere, the less the effect of adding another–the combined effect, after all, cannot be to block more than a hundred percent of the long wave radiation coming up from the Earth. The warmer it is, ceteris paribus, the more water vapor is in the air. Hence the greenhouse effect tends to be less in warm times and places than in cold.
at September 26, 2016 13 comments:

A Little More on Climate and the Food Supply

A recent post discussed the effect of climate change on the food supply. I now have a little more information.

I start with the table from Lobell et. al. 2011 which I showed in my previous post: 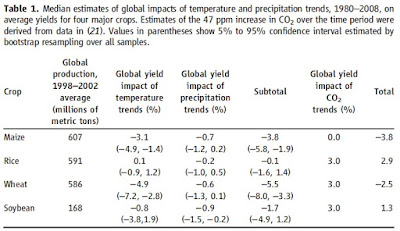 The issue was the effect on food supply, so it matters how much of each crop is used for food.