How to do an audiobook of Hidden Order

As I mentioned in a recent post, I have now brought Hidden Order back into print. I am considering producing an audiobook of it, but there is a serious problem.

The problem is that the book contains more than forty figures. I could make the figures available on my web page or on a pdf included with the audiobook, but most people will not be sitting in front of a computer while they listen to the book. Viewing figures on a cell phone while driving down the highway, although not impossible, would be hazardous. So either they ignore the figures entirely and skip over passages that depend on them or they listen to parts of the book that don't have figures on their way to work and go over the parts that they have skipped sometime later when they have access to a computer or smart phone. Not impossible, but clumsy.

The alternative is to rewrite the book to eliminate everything that depends on the figures. That would not be impossible but it would be a rather different book, one that was no longer a substitute for a college class in economics. And it would be a lot of work.

I have been assuming that people who listen to audiobooks mostly do it in situations, such as driving, where looking at a picture on a computer screen is not a practical option. Is that true? Are there a substantial number of people who enjoy listening to an audiobook while sitting at home and could easily enough switch to looking at a figure while listening to the text that discusses it?

Perhaps I should forget about Hidden Order and do an audiobook of Legal Systems Very Different from Ours instead. No figures.
at November 22, 2019 7 comments:

Now that the new edition of Hidden Order is out, I'm thinking about doing another nonfiction book. One intriguing possibility is a book using World of Warcraft to teach economics. For example ...

Consider the economics of the auction market. To first approximation—perfect competition, zero transaction costs—the price of crafted goods equals their production cost. If we ignore the player's time, that's the cost of the materials to make them.

That breaks down for a variety of reasons, all economic. Crafting and selling takes time, time when some players would rather be doing something else — although that doesn't matter if there are enough who enjoy the auction house game. The market for many crafted items has only a small number of sellers at one time, giving imperfect competition and the possibility of cartels. To craft an item you need the pattern, bought from a trainer or other NPC or on the auction house, possibly at a high price. To learn the pattern, you need sufficient skill. It looks like a product with a fixed cost and a constant marginal cost — except that materials may get more expensive if you want to buy more of them, which gives an upward sloping supply curve.

On the other hand ...  making things can give you skill. One would expect, and  sometimes observes, products that  consistently sell for less than their materials cost, the difference being the price players are willing to pay in order to skill up.

For many, indeed most, goods the market is thin. One result is price changes over time, most obviously between low population and high population hours and days. Some of them are predictable, but to make money by arbitrage you need a predictable price difference that more than makes up for the 5% auction house cut.

As all of this suggests, the auction house itself, the most obviously economic part of the game, could be used to teach a lot of fairly sophisticated economics. But there is much more.

Consider the matter of forming two player teams to do quests or kill things for loot and experience. The optimal team is probably a paladin and a mage. Why? The mage is the highest dps class, the paladin is both a good healer and a tolerable tank, so the team benefits from division of labor. A druid is also both a healer and a tank but also a tolerably good dps, so a druid has less need of a mage companion than a paladin does and will be willing to offer less favorable terms. That gets us to an important insight of comparative advantage: You want to trade with people who are not only good at what you are bad at but bad at what you are good at.

For an entirely different insight ... Of the first three fire elementals you kill, farming them to make the money to buy your mount, two drop (very valuable) elemental fire. The next ten drop nothing. Obviously Blizzard's random number generator is broken, perhaps deliberately.

It probably isn't. Humans are equipped with very good pattern recognition software, good enough to find patterns that are not there. Which raises the question of whether the business cycle is really a cycle or a random walk made to appear cyclic by the same mechanism.

There are a few of the examples that have occurred to me. The purpose of this post is to invite readers who have played WoW to offer more.

Note: My examples are based on Classic WoW, since that is what I now play, having given up on the standard version of the game some time back.
at November 21, 2019 7 comments:

Hidden Order is Back in Print

I have just republished Hidden Order: The Economics of Everyday Life as  a kindle and a paperback, both available from Amazon. 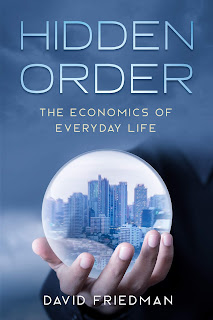 The book is intended for readers who would like to learn economics for the fun of it, economics understood not as the study of the economy but as a tool for understanding human behavior: crime, marriage, politics, and much else.

“In David Friedman’s hands, economics becomes a sprightly science. Friedman has the rare knack of introducing fundamental principles with humorous examples.  . . . a dazzling array that runs the gamut from supermarkets to pirate ships. . . . A clear picture of how simple assumptions about individual preferences and human rationality can increase our understanding of ordinary market behavior and a wide range of social institutions from marriage, to crime, to voting.”
Richard A. Epstein, The University of Chicago Law School


"The book of the month is HIDDEN ORDER: The Economics of Everyday Life. One doesn't normally think of an economics book as light and pleasant reading, but David makes it seem so. If you have any interest in economics at all, you'll find this book both readable and fascinating; and I guarantee you'll learn something from it."
Jerry Pournelle in Byte


“Hidden Order helps us look at everyday experience from the perspective of basic economics. Readers will be surprised to learn how much economics explains about their own behavior as well as about that of others …”
James M. Buchanan, Nobel Laureate in Economics, 1986


"The author is a talented teacher, and he moves effortlessly from the traffic jams and grocery stores to the efficient-market hypothesis, price theory and backward-bending labor curves. He fine-tunes his approach along the way -- starting with what he calls a "static" set of circumstances and tackling the real world, with its change and uncertainty, later in the book. Economics, he acknowledges, involves a "continual balancing act between unrealistic simplification and unworkable complication."
Deborah Stead in The New York Times


“David Friedman's gift is making some of the more complicated concepts of economics simple. In _Hidden Order_, he does this with his trademark wit and ingenuity. The most esoteric yet essential aspects of modern economic thought - marginal utility, indifference curves, opportunity costs, Nash equilibria, rent-seeking, etc - all come to life in this modest paperback.”
Amazon reviewer


David Friedman apparently has written the book for the purpose of teaching you something, something which many textbook writers apparently don’t feel the need to take into consideration.”
Webbed review by Garret Wilson


“A surprisingly lucid and useful book, and about as appealing as economics gets."

An Argument for Venezuelan Immigration