Why Do I Waste Time Arguing With Unreasonable People Online?

My son just put the question to me (I was commenting on Facebook at the time), and I thought some here might be interested in my answers:

1. As an excuse not to work on my current book. The chapter drafts I have just been looking at are in worse shape than I thought, which is depressing.

2. In the hope that by putting ideas out, some of them will spread, with some (small) effect on the world. Posts here probably get more readers, but comments on Facebook reach a different audience, one less likely to be familiar with the ideas.

3. In the hope of finding someone reasonable to argue with, which might result in changing his views, or mine, or both, in a desirable direction, as well as being fun. It happens very rarely, perhaps once every few months, but I'm an optimist.

4. Because arguing with unreasonable people online, and watching unreasonable people argue with each other, gives me useful, if depressing, information about what such people are like and (I hope an exaggerated) picture of how common they are. Like most people, I live mostly in a bubble, interacting with a very nonrandom set of people, and this gets me a view outside it. The same is true of reading trade chat in WoW, also depressing.

5. For the same ignoble reason that people spend time beating up on NPC's in WoW and similar games.
at October 25, 2015 39 comments:

Visiting China last year, I was struck by an interesting puzzle. In the U.S., if you are in a big building selling clothes or groceries, a department store or a supermarket, the people selling them to you are employees of the firm that owns the building. In China, you are much more likely to be in a building whose owners rent it out in small pieces to a lot of individual sellers. Instead of a supermarket, you have a large building with half a dozen butcher stalls, eight fish stalls, ...  . Instead of a department store, you have the same pattern with different stalls selling different sorts of clothing, jewelery, electronics.

The puzzle is why.

On my recent visit to Brazil, I came across another such puzzle. In Brazil, at least in Sao Paulo, restaurants frequently sell food not by the dish but by the kilo. You fill up your platter with whatever combination of salad, beans, meat, desert you want, they weigh it and charge you. I do not believe I have ever seen that pattern in a restaurant in the U.S. The closest I can think of is the cafeteria in my university, which sells salad by weight, most other things by individual price.

There are obvious advantages and disadvantages to that way of selling food. The puzzle is why it is common in one country, rare or non-existent in another.

That reminds me of another puzzle that struck me a very long time ago. Some of the costs that a patron imposes in a restaurant depend on what he eats, some on how long he sits. Why are there no restaurants that price the two separately—charge a lower than usual price for the food, but add an additional charge for the time you sit?

For any reader who teaches economics, I suggest that working through the logic of these three puzzles, seeing what the costs and benefits are of one form of organization over another, would be a good problem to set your students. For any graduate student looking for a thesis topic who is more interested in doing economics than proving how much mathematics he knows, one of these puzzles might be worth considering.

The first step, of course, would be a survey of the literature to see if someone else has already offered an adequate answer. If you find one, let me know.
at October 13, 2015 33 comments:

Good Advice From the Fourteenth Century

Ibn Battuta was a 14th century North African world traveler—I like to describe Marco Polo as his 13th century Italian imitator. He started by going on pilgrimage to Mecca and Medina, got bit by the travel bug. In the course of his travels he went down both the East and West African coasts, providing our only source for those areas in that century. Hearing that Mohammed ibn Tugluq, the fabulously wealthy sultan of Delhi, was generous to foreign scholars, Ibn Battuta set off for India and ended up spending several years as the chief Maliki Qadi of Delhi. His account of his visit to China is dubious, but he probably got at least as far as somewhere in south-east Asia. Eventually he came home and wrote an account of his travels, the Rehla, which survives.

Early on, he swore never, if he could avoid it, to return by the same route he went out on. In my travels, mostly wandering around foreign cities (at the moment Sao Paulo), I have found it good advice. Walk out by one route, back by another, and you see twice as much.
at October 13, 2015 5 comments:

In a Market in Sao Paulo 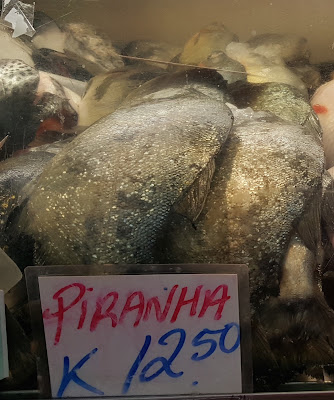