Someone comes up with a drug, or a technology, that gives the user perfect recall, the ability to rerun, in full detail, any part of his life. How would it get used?

One possibility is for self-education. Observing selected past experiences with a fifty year old mind and seventeen year old eyes might teach me a good deal about mistakes I had made, some of which I might still be making.  It might provide information about what it was like to be seventeen useful in dealing with current teenagers, including my own children. In life as it now is, we get to see each episode only once. As any video game player could tell you, being able to play the same events over and over makes it possible to greatly improve your skill. In my hypothetical, unlike a video game, you don't get to  try different tactics and see what happens. But you do get to see repeated replays of what you did the first time and the results.

There is, however, a potential down side. After things go wrong, a marital breakup, a business failure, an election loss, it is tempting to go over it again and again, agonizing over what you did wrong and what you should have done. Now you can do it in living color. Forever.

The version of this scenario I have just described is probably impossible, since there is no reason to believe that a full record of my past is actually stored anywhere in my brain. But a different version, enabled by a different technology, might well come into existence in the not too distant future.

Consider a world with greatly improved surveillance, a much advanced version of video cameras on poles combined with face recognition software and database technology. In that world, David Brin's Transparent Society, everything that happens in a public place is recorded and findable. And once we have video cameras with the size and aerodynamic characteristics of mosquitoes, practically every place is public.

If the system is open access we are back with perfect recall. I am no longer watching my past life through the eyes of my past self, but I still get to watch it.

I was born too early. But it might be reality for my future grandchildren.
at July 21, 2016 18 comments:

Donald Trump and The Boy Who Cried Wolf

In 1964, Fact magazine published an article whose headline was "1,189 Psychiatrists Say Goldwater Is Psychologically Unfit To Be President." It included a variety of detailed and unflattering diagnoses of the Republican candidate for president by psychiatrists none of whom had actually examined him or, so far as one could tell, met him.

Both, I think, correct statements.

Those are particular incidents that struck me when they occurred–the two links above are to blog posts I made at the time. But the pattern is a general one. Center left writers and media routinely accuse candidates on the right of being ignorant, stupid, racist, and/or crazy. Most of the time it isn't true.

Donald Trump is, in my view, less  qualified to be president than any major party candidate in my lifetime. But after being told more or less the same thing about every candidate seen as right of center for the last fifty years, why should voters, especially voters right of center, believe it?

A commenter on Facebook provides a link to Bill Maher  admitting what I wrote above--that they cried wolf with previous Republican candidates who really were not all the terrible things they claimed. But this one, he says, is different.

He also makes a testable prediction–that Trump will seize power and remain in office for the rest of his life. Eight years from now I want to see him explain that one assuming, as I do, that it will prove false.
at July 21, 2016 17 comments:

I recently spent a few days in London and was struck by several features of current London culture:

1. Several times, younger passengers on the Tube (subway) offered me their seats. I have grey hair but do not appear (and am not) particularly feeble. I would be mildly surprised to have the same thing happen in the U.S.

2. Most hotels I have stayed in recently, in the U.S. and abroad, have a safe in the room with a combination that the guest sets. The hotel I stayed at in the U.K. didn't. That might mean that U.K. guests are less worried about pilfering by hotel employees than hotel guests elsewhere. Of course, my sample size is very small.

3. Walking through Notting Hill (no Napoleons visible) I observed the scene shown below, jam offered for sale with a request to put the payment through the house's mail slot.  I cannot remember having ever seen a similar scene here, although I don't suppose it's impossible. 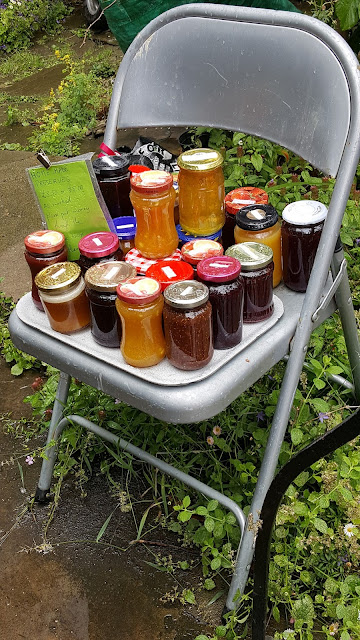 Scotland and the EU

One result of the British vote to leave the EU has been a revival of calls for Scotland to leave the U.K. Doing so is considerably more attractive if combined with EU membership. That raises the question of whether, if Brexit were followed by Scottish secession, the EU would be willing to let the Scots in.

One argument in favor, from the standpoint of the EU, is that encouraging Scottish secession is a way of punishing the U.K. for leaving and so deterring other countries from doing so. One argument against is that allowing a breakaway region to join sets a precedent that some current EU members, most obviously Spain, might be unhappy with. The Scots could, of course, argue that the precedent would only be relevant to the case of breakaway regions from non-member states. The Spanish might or might not be convinced.
at July 09, 2016 10 comments:

Much of the discussion of the recent British vote to leave the European Union takes it for granted that the result will be less free trade for the U.K. While that is possible, so is the opposite result. Britain can still negotiate a free trade agreement with the EU, as several non EU countries have done, assuming both sides want it. And leaving the EU leaves Britain free to negotiate free trade agreements with other countries, most obviously the Commonwealth.

For those who supported free trade, the objection to the EU was the rest of the package, in particular extensive regulation. Many people take it for granted that if you have free trade such regulation is needed to prevent countries from cheating, regulating the national market in ways that favor their producers. That argument assumes that national governments want to cheat on free trade. It treats a free trade agreement as a deal where each country gives up something it values, its own trade restrictions, in exchange for the other country doing the same.

Much talk about trade views it that way. Politically speaking that view is correct, since trade restrictions are a way in which politicians can benefit well organized producer groups in exchange for their political support. Economically speaking, however, that view is false. The gain from protecting U.K. manufacturers from foreign competition comes at the cost of their customers and U.K. export industries.

Unilateral free trade, the policy of England in the 19th century and Hong Kong in the 20th, produces a net benefit for the inhabitants of the country that adopts it, quite aside from any benefits to their trading partners. From the standpoint of the welfare of the citizens rather than their rulers, the usual trade negotiation consists of each side offering to stop shooting itself in the foot in exchange for the other side doing the same. If governments engaged in trade negotiations were trying to maximize the welfare of their inhabitants, there would be no need for either tariffs or agreements on regulation, since there would be no incentive for the governments to use regulation to cheat on trade agreements.

If supporters of free trade in the U.K. and potential trading partners are sufficiently numerous and sufficiently well informed, Brexit should lead to an increase in free trade. If they are numerous but poorly informed, believe that the benefit comes from a trading partner abandoning its restrictions, it still might lead to an increase. We will have to wait and see.
at July 09, 2016 11 comments:

Where we live, private fireworks are illegal. Walking around the neighborhood for an hour or so after dark, I must have seen several hundred rockets go up as well as a lot of ground level displays. Lots of people out watching.

An Argument for Venezuelan Immigration