Report from a Sample Size of One

I recently put up an essay with information that may be of use to male readers over forty.
at December 22, 2015 12 comments:

How To Lie While Telling the Truth: Part II

My previous example was an attack on religion. This time it is a defense of AGW catastrophism.

It has long been known that increasing the concentration of CO2 increases the yield of C3 plants, including most crop species. The usual estimate is that doubling CO2 concentration, roughly what is projected for the end of this century, increases yield by 30% or more. This is an inconvenient fact for people who want to argue that AGW will reduce food supplies. Clearly what they need is a scientific article to cite, proving that CO2 is actually a bad thing for crops.

And they have one, in Nature no less: Increasing CO2 threatens human nutrition.

The article itself is behind a pay wall, but a good deal of its content is revealed in the abstract and various admiring news stories, including this one: 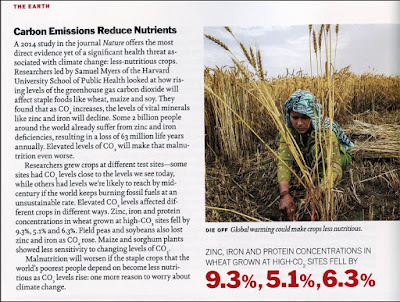 A quick google found the following table of minerals for wheat: 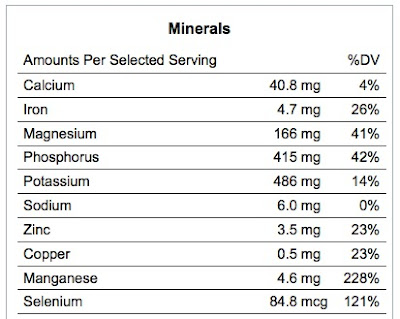 It includes ten minerals, zinc and iron among them. The fact that the authors of the article could find two whose concentration went down, not by very much, is interpreted as a threat to human nutrition. No information on any that went up.

It's worse than that. The figures, at least according to the news story and the abstract of the article, are for concentration. Increasing CO2 increases the yield of C3 crops. If the concentration of zinc goes down by nine percent but the total crop yield goes up by more than nine percent, total yield of zinc goes up, not down.

Further, the abstract makes it clear that the effect varies from one cultivar to another—so if there really is a problem with the concentration of zinc and iron, farmers will have an incentive to switch to cultivars for which there isn't.

If, with a doubling of CO2 (the abstract does not say what concentration was used in the experiments), crop yield goes up by 30% but the concentration of two minerals goes slightly down and the yield of protein only increases by 24%, that is a "threat to human nutrition."

A striking example of propaganda disguised as science.

Another paper, not behind a pay wall, by many of the same authors. It makes it explicit that "we believe the simplest approach is to model diets that are unchanged with respect to calories and composition."
at December 18, 2015 24 comments:

Someone on the FaceBook Climate Change group asked a reasonable question:

I'm trying to understand this big conspiracy everyone keeps hinting at, but never explains, now lets say AGW is a complete Hoax and Obama has somehow tricked the world to help him to trick americans to pay more taxes and put solar panels on their roof, now can someone explain how this evil conspiracy works, like who wins,who profits from this con, , what is the end game...?

I thought my response might be of interest to readers here:

"Conspiracy" is too simple. There are a variety of reasons why different people wildly exaggerate the implications of AGW. They include:

Politicians in poor countries who want to use claims of harm to their countries to get rich governments to give them money.

Politicians in rich countries who want arguments for subsidizing firms run by their supporters, passing regulations that give them power, collecting taxes, and a variety of other things.

News media that want to get readers. "Global warming is going to flood New York City" is a better story than "Global warming has raised sea levels by eight inches over the past century and might raise them by another couple of feet by the end of this century."

People who want to pretend to themselves and others that they are part of the intellectual elite, know important things that others deny.

People who like imagining catastrophe. You see the same pattern on the other side of the political spectrum with survivalists, and more generally with collapse of civilization science fiction.

The combined effect has been to convert positions on global warming from a scientific dispute to an identity marker for ideology. You can see the effect reading this group--people keep wandering away from climate questions to gun control or whether Obama is good or bad or other things linked to ideology.

Once you have that linkage, there is strong pressure on either side to take more extreme positions. Believing that global warming is a problem marks you as a loyal member of the blue tribe. So believing that it is a really big problem marks you as a very loyal member, whereas suggesting that it might be a minor problem marks you as a possible traitor to tribal loyalty. Similarly on the other side. Doubting the catastrophic story is all very well--but it's a stronger signal of red tribe loyalty to claim that warming is a fraud due to doctored figures, or that you have a scientific proof that AGW is wrong, or ... .
at December 11, 2015 35 comments:

How Can Law Be Enforced Against the Executive?

The nonpartisan Government Accountability Office concluded that the Obama administration violated a “clear and unambiguous law.”

A recent post to the Volokh Conspiracy blog argues that a 2014 prisoner swap was blatantly illegal, in violation of a statute requiring that Congress be given thirty days advance notice of such an action. What interests me about it is not whether the claim is correct but, if it is correct, what ought to be done about it. More generally, how can either statutory or Constitutional restrictions be enforced against the executive branch?

In the case of an ongoing action, the obvious answer is that opponents can ask the courts to block it. Examples would be the various suits, past and present, over Obamacare, and Obama's policy on illegal aliens. But what about an action which is already over at the point when opponents learn of it—as was apparently true of the case that the post deals with?

The usual solution to that problem, in both tort law and criminal law, is to punish the tortfeasor or criminal. But government officials are not usually held liable for obeying the orders of their superiors, which shifts the responsibility to the President. If the violation is sufficiently serious, he can be impeached—the President of Brazil is currently threatened with impeachment for spending very large amounts of money in ways alleged to have been in violation of Brazilian law. But it's hard to argue that the particular case alleged reaches the level of “treason, bribery, and other high crimes and misdemeanors.”

One problem is that the responsibility is on the President, who is effectively immune from any sanction short of impeachment. Another is that all crimes are treated as offenses against the government, prosecution is by the executive arm of government, hence crimes that the head of the executive arm approves of are unlikely to be prosecuted. That is the same issue that arises in the very different context of offenses by police.

Solutions? Either in current law or in ways one could imagine altering it?
at December 10, 2015 17 comments:

Why am I seeing ads on this Blog?

I have never arranged for any advertisements here. But sometimes recently, when I click on a post, I get a timed ad and have to wait some seconds. I have no idea what is going on. If any of my readers observe the same thing and can figure out where the ad is coming from, please let me know.
at December 08, 2015 18 comments:

Inflating the Cost of Carbon