I am seeing multiple news stories warning that Sweden is a horrible example of the bad result of not locking down. They report, correctly, that Sweden's deaths per capita figures is a little higher than that of the U.S., much higher than Denmark and Norway, although a little lower than the U.K.

Can anyone offer an explanation other than deliberate fraud for a news story that mentions the one figure but not the other? It is, after all, exactly the pattern we would expect if a strategy of getting to herd immunity had succeeded. 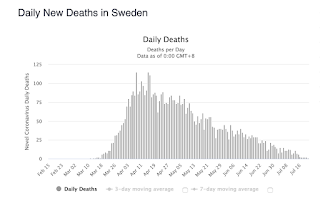 Source
P.S. I have now seen a different figure for Sweden, with daily deaths about ten times higher. I have not yet figured out why different sources are giving strikingly different numbers, but if the second number is correct, what I wrote in this post is wrong.
at July 22, 2020

Doesn't "fraud" have a specific meaning, and doesn't that meaning not apply here? As everyone got sick of me saying over at SSC, the news is just a show put on by people who only ever seriously studied things like English and acting, in which they impersonate what they think "an authoritative and objective expert on what is true and important to know about" ought to look and sound like.

I have a serious question:

Has the American news media ever been mostly objective?

Seems like, outside of local news sources, national outlets have always been agenda driven reporting. Meaning, at best, selective fact reporting and often dubious omission when it runs counter to the desired agenda.

Sailer often points out when hate hoaxes are often covered more objectively than the national response because the details matter to local people. At the national level, the only the that matters is the narrative. Anyway, I think you are pointing out narrative journalism which self-selects for a predisposed set of viewpoints like the guy with a hammer who can't help but looking at everything as a nail.

Easy, reporters are not nearly as good at math as you, and they are on a time crunch for stories, plus their biases say lock down good none lock down bad.

(1) I just looked at the corresponding data for Germany. An XLSX file of weekly deaths can be found at https://www.rki.de/DE/Content/InfAZ/N/Neuartiges_Coronavirus/nCoV.html (scroll down to "Todesfälle nach Sterbedatum"). There were 44 deaths in calendar week 25, with an unbroken downward trend for 10 weeks.

For comparison, there were 3046 traffic deaths in Germany in 2019 (in German here: https://www.adac.de/news/bilanz-verkehrstote/), which is incidentally the lowest number since records started. This comes out to about 3046/52=58.6 traffic deaths per week.

Thus, fatalities from COVID are now at 75% of average 2019 weekly fatalities in traffic (which, in turn, are likely lower this year than last year).

Nevertheless, the news report the 7 day average of new infections every single day - but the number of deaths has not been reported at all in the last weeks. Not a single time.

(2) I offer the following explanation: the media believe they need to take the effect of their reporting into account. And they believe that reporting drastically falling fatalities might make people overconfident, leading to a relaxation of - official and voluntary - countermeasures and more suffering down the line.

This is the most charitable explanation I can come up with. It still horrifies me, but it at least makes for some educational discussions with my children.

@Alaska3636 I can't tell if you were responding to me, but my answer would be that no, the news has never been mostly objective, but it's probably a lot closer to that (vague, unclear) ideal now than it was in the past. This is for a few reasons, most importantly (1) the increased availability of and access to fact checks, counternarratives, and upstream sources, and (2) the higher degree of savviness most people now have about what the news is and how the sausage gets made. Journalists can't get away with as much anymore.

This applies to both national and local news. The division between those mostly has to do with something else I've yammered on about a lot, which is the fact that the more "importance" a news story has, the less likely a typical audience member will be able to practically use the information. Meanwhile the more the information is likely to be of practical use, the more likely the typical audience member will be able to access that same information from upstream sources. So, national and local news are both really just gossip shows: one is national/world gossip, one is local gossip.

Also keep in mind that one reason for Sweden's high death total is poor nursing home policy. This is largely independent of lockdown policy and it is wrong for critics to conflate the two.

We'll see if it stays this way, but the number of total deaths per week reached normal levels about two months ago here in Sweden. Week 27 which is the latest number I've seen it was lower than the average from the past five years.

Though to be fair we were below average for the first 11 weeks of the year.

The Meaning of "Libertarian: A Question