The cartoon shown below gets posted to FaceBook by people arguing for policies to reduce global warming. The implicit assumption is that all of the things they want to do for that purpose are good things that they would be in favor of even if warming was not a problem. It apparently does not occur to the people who post the cartoon that one implication of their posting it is that they have a reason to believe in, and preach, the threat of catastrophic global warming—whether or not it's true.

I expect that most of the people who post the cartoon, or approve of it, would see the point in a commercial context. They realize that the fact that someone is trying to sell you a car is a good reason to be skeptical of his account of its condition. Most would also recognize it in the political context, providing it was not their politics in question—many of them, after all, believe that criticism of CAGW is largely fueled by the self-interest of oil companies.

But it apparently does not occur to them that, for someone not persuaded of their policies, the same argument applies to them, that, from the standpoint of the people they want to convince, the cartoon is a reason to be more skeptical of their views, not less. 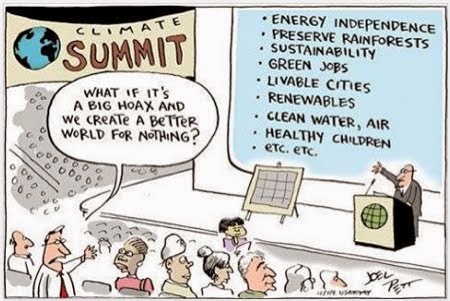 So, David, those who dismiss manmade climate change as posing any real problem - what's their agenda? Are they hoping that some sort of appeasement will suffice?

GM: Different people have different agendas. In my case, it's partly a result of having been involved in a similar dispute forty or more years earlier, over population. A lot of catastrophic predictions were made, and what actually happened was just the opposite—calories per capita in the Third World continuing to trend up instead of mass famine. My published view in that controversy was that the effects were too uncertain to sign the sum—at a point when practically everyone else, aside from Julian Simon, was insisting the the conclusion was obvious and something had to be done immediately if not sooner.

Also partly a general aversion to elite conventional wisdom, based on other examples.

I know people who are adamant that we should accept the scientific necessity of steps to reduce global warming, even tho they do not seem to have any interest in climate science. So how do they come to this conclusion? As well as I can figure, their world view is such that there are good guys making the world better, and bad guys making it worse. The environmentalists are with the good guys, and the big oil companies are with the bad guys. That is all they need to know.

I prefer the approach taken by The Economist. It makes sense on the same grounds as the thinking behind this cartoon, but is based on free-market ideas.

As soon as it became clear that capitalism's collapse was not inevitable the same policies were proposed to 'fix' global warming.

Interestingly given that the climate hasn't warmed as fast as the models predict we now see people proposing statist measures as being necessary to 'fix' the post credit crunch economy.

Quentin: I haven't looked at the proposals from the Economist, but it's a bit tricky. Subsidizing farmers can either increase output (parity) or decrease it (soil bank). Whether auto transport is on net subsidized or taxed in the U.S. isn't clear.

It is not that simple, like John Kerry saying to African nations not to build new farms because of CO2 release?

Please starve and remain in poverty so you do not release more CO2, because rich countries released already to much CO2 to become rich.

But isn't there a difference between the cartoon and the car-sale example?
While the car dealer has obvious egoistic incentives in a win-loose situation*, the AGW proponents refer to the common good.

In this sense the cartoon and your criticism documents the different quality of the AGW question. I can confirm from personal discussions that AGW proponents indead claim to know - better than other people - what's good for everyone.

In any context, this is not a trait of people I feel comfortable discussing with.

* I don't think the whole car sale thing is win-loose, but the negotiation aspect of it is. ;)

You recognize this is an ad hominem approach, where you dismiss ideas based on their source rather than their accuracy, I hope.

That is no more an ad hominem approach than is appeal to scientific consensus, i.e., accepting ideas based on their source rather than their accuracy.

There are definitely folks for whom Prof. Friedman's point hits home. Naomi Klein recently published a book entitled "This Changes Everything" about how the threat of climate change means we should adopt the same policies that she has been advocating for decades.

At the same time, there are plenty of folks who haven't responded to climate change by advocating all the same stuff they advocated before. Stewart Brand, for example, used to be an anti-nuclear activist. Now he is very much pro-nuclear power, and climate change is a big reason for that. Geoengineering is another example. To my knowledge, prior to the rise of concern over climate change, no one was suggesting that we add aerosols to the upper atmosphere just because they wanted the sky a different color.

More generally, I don't think there is anything wrong with advocating a "no-regrets" approach to dealing with a problem (be it climate change or any other issue). It is an eminently sensible response to a problem (assuming, of course, that the policies really are "no-regrets"). In fact, I'd say that folks on the right need to spend more time thinking about how they sorts of things we would want to do anyway might be adapted to deal with climate change.

Since many people who preach about global warming also happen to be atheists, there's a pretty good subversion of this: http://i.imgur.com/R7CHlTq.jpg

It apparently does not occur to the people who post the cartoon that one implication of their posting it is that they have a reason to believe in, and preach, the threat of catastrophic global warming—whether or not it's true.

It seems to me the exact opposite. If everything they want to do is good with or without global warmening, then why don't they just campaign for their agenda on its own alleged merits? Why do they fight so tenaciously for their scientific theory if it's not necessary to justify their agenda?

What if we Freeze, Starve and Impoverish people in the process of creating this utopia you imagine? As Hayek stated: "The curious task of economics is to demonstrate to men how little they really know about what they imagine they can design."